Bringing up the next generation of leaders is a responsibility that requires the assistance of the entire community. When families, communities and schools work together, students have a much greater chance at succeeding in school and throughout life.

Governor Rick Scott has proclaimed November Florida Family Engagement in Education Month, and the Florida Department of Education (DOE) is encouraging families to take this opportunity to become more active in their child’s school and extracurricular activities. By investing more time as a unit in their child’s life, families can have a significant impact on their child’s future. These children are Floridian students today, and with family involvement, they can be state and national leaders tomorrow.

To help families achieve this goal we have developed resources to help families get more engaged. FloridaStudents.org is a great source for families to find Florida Standards student tutorials and resources that will help students succeed in the classrooms. There you will find support for student learning in language arts, mathematics, science and civics.

Parents can also visit CPALMS.org (Collaborate Plan Align Learn Motivate Share) to see the Florida Standards by grade and subject, course descriptions and instructional resources created specifically for the Florida Standards. CPALMS serves as the state’s official source for standards and is full of useful tools and information.

At DOE we work hard to ensure all Florida students have access to a high-quality education that will prepare them to succeed in college, career and life, but there is no replacement for the love and support of a student’s family. Our collective efforts will open many doors for our students and will create a brighter future for our great state.

This year’s Family Engagement Month theme, “One Team…One Dream,” captures the essence of the relationship between all education stakeholders as we partner to support the education of children. So, please make the pledge to fully engage in your children’s education. Not just during the month of November, but throughout the entire year.

Halloween is one of the most exciting holidays we celebrate here in Florida. From ghosts to vampires to clowns and fairies, families are fully costumed and ready for a night of fun. So let’s make sure our students and parents stay as safe as possible while out in our communities with a few helpful Halloween Safety Tips.

Tips for Motorists on Halloween

Throughout Florida’s history, many Hispanic leaders have made great contributions to the Hispanic community and helped our state become what it is today – a place known for its rich culture, vast history and dynamic people. At the Department of Education, we are proud to celebrate Hispanic history during Hispanic Heritage Month, September 15 to October 15.

Although I am not currently instructing students in the classroom, I will always be an educator at heart, so I want to provide a brief history lesson in this post. September 15 was chosen as the starting point for Hispanic Heritage Month because it is the anniversary of independence of five Latin American countries: Costa Rica, El Salvador, Guatemala, Honduras and Nicaragua. In addition, Mexico and Chile celebrate their independence days on September 16 and September 18 respectively.

The observation first began in 1968 when President Lyndon B. Johnson and the U.S. Congress declared Hispanic Heritage Week in September. Twenty years later, President Ronald Reagan extended the week to a 30-day period.

For as long as we all can remember, Florida has been known as the Gateway to Latin America. The food, music and traditions provide a critical link between the United States and South America. These strong relations with South America enable Florida to exercise a unique model of two-way trade, greatly promoting economic growth.

We are working every day to prepare Florida students to compete in a global economy, and Hispanic Heritage Month provides educators and parents an exciting opportunity to expand our students’ knowledge of the world in we which all live and work.

I hope that our state’s educators will take advantage of this observance and bring Hispanic history into the classroom. For more information on Florida’s celebration of Hispanic Heritage Month, visit www.floridahispanicheritage.org

Parents are filling the vehicle drop-off zones, teachers are organizing the books and desks, and students are flooding the hallways and classrooms. All things are set in motion to begin yet another amazing school year in Florida.

For many educators, this time of year is both exciting and a bit stressful, so we recruited 2016 Florida Teacher of the Year Diane McKee, a 14-year teaching veteran, to share her top tips to help new educators have the best teaching experience possible. We hope this list will help guide you as you settle in to the new academic year. Have a helpful tip we left off? We’d love to hear from you – leave a message in the comments section and everyone can benefit!

Between the yellow sunrises and the orange sunsets, from bright blue skies to starry nightscapes, Florida easily stands out as one of the country’s most visually appealing states. For these diverse visual features and more, it’s no wonder why so many families and individuals choose the Sunshine State as a retirement destination. And yet, due to maladies such as cataracts, not all of its citizens and welcomed visitors share the same view of our great state.

For the many citizens diagnosed with cataracts, this is an unfortunate reality. Cataracts, a clouding of the lens in the eye that affects vision, are a leading cause of visual impairment among aging Americans, affecting more than 22 million Americans aged 40 and older. That number is predicted to increase to 30.1 million by 2020. In 2007, Florida was ranked No.1 in residents aged 65 and older who are diagnosed with age-related eye diseases. These individuals are our parents, neighbors and loved ones, so it is important we do all that we can to increase awareness as we recognize August as Cataract Awareness Month.

The cataract visual impairment can become an incredible burden for its victims as it decreases the quality of life, ability to read, color perception, affects one’ independence, greatly increases the risk of injury and can destroy self-esteem, which may lead to depression. While being diagnosed with cataracts is a serious measure, there are early symptoms and signs of detection to help prevent any further occurrence of symptoms like faded color perception, cloudy or blurry vision, or frequently changing your prescription in your glasses or contact lenses.

Due to the large amount of sun we receive year round, Florida residents should take precaution and wear sunglasses and hats with a brim. Another source of protection comes from living a healthy lifestyle. Eating a diet of healthy foods (such as colorful fruits, vegetables, and whole grains), exercising, and not smoking can prevent cataracts. These are important steps we can take to live happier and healthier lives, empowering us to enjoy all the beauty the Sunshine State has to offer.

The Department of Education’s Division of Blind Services helps Floridians who are blind or visually impaired to acquire the skills and tools to live more independently within their homes and communities. Blind Services can assist individuals with adjustment to blindness, use of assistive technology, travel training and independent living skills. For more information about resources that support individuals with visual disabilities, contact Florida’s Division of Blind Services. 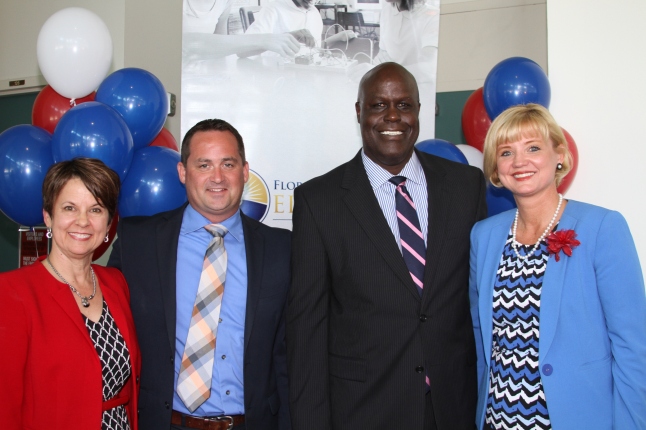 In Florida, we are fortunate to have some of the nation’s very best educators in the classroom, preparing our state’s students for a lifetime of success. We have more than 190,000 teachers, 4,000 principals and several thousand assistant principals, and, at the Florida Department of Education (FDOE), we feel it is incredibly important to recognize their contributions to student learning. We host a series of events throughout the year to honor those who fill these very important roles, and today we are excited to share about the most recent one.

On Monday, August 3, K-12 Public Schools Chancellor Hershel Lyons led a special recognition ceremony at the Turlington Building in Tallahassee. Those who have visited FDOE’s headquarters know that upon entering the building, guests immediately see the Florida Distinguished Educators Wall, which features photographs of just a few of Florida’s many outstanding educators.

For the next year, their photos will be displayed in the Turlington Building lobby to serve as a daily reminder to all DOE employees and our guests of the vital role teachers play in the lives of our state’s students.

2016 Florida Teacher of the Year Diane McKee has been a businessperson turned teacher for 14 years. During her time, Diane has taken the term “raise the bar” literally, hanging a red bar in her room to remind her students of this goal daily. She has said that her students continually exceed her high expectations.

Principal Angela Murphy–Osborne has been a principal for 16 years and has been a true catalyst for igniting educational transformation within her schools. She led two Title I schools to success and helped Palmetto Elementary become the only elementary school in Florida to jump from an F to an A in 2013-14.

At the Department of Education, we seize every opportunity to celebrate our educators. Having this event not only shows other educators that hard work pays off, but it also shows we are thankful and appreciative of all that you do. Congratulations to the newest members of the Florida Distinguished Educators Wall! 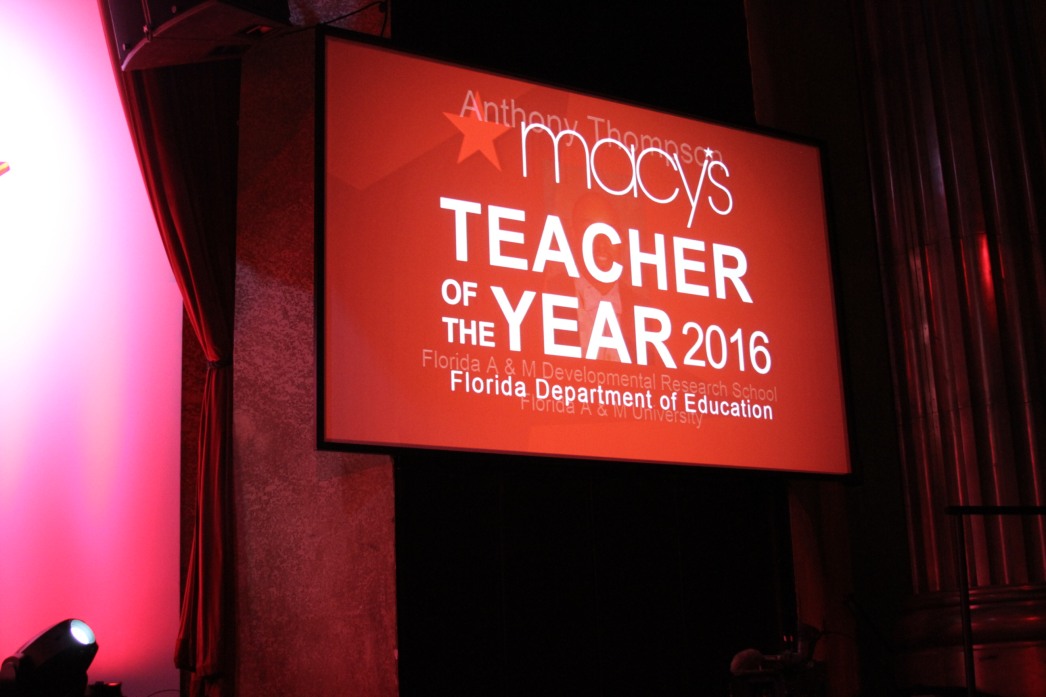 Last week, we hosted one of the year’s most important events—the annual Florida Teacher of the Year retreat and gala. Diane McKee took home the top honor, 2016 Florida Teacher of the Year, but all of these teachers are winners. To honor their hard work and dedication to our state’s students, we invited all district teachers of the year to Orlando where they were treated to four days of professional development and networking.

It was such a treat for me to spend time with these outstanding educators and I want to thank the sponsors for making these events possible. We are fortunate to have strong partnerships with many national, state and local businesses and non-profit organizations whose leadership teams share our passion for education and appreciate the critical role teachers play in preparing our state students for lifelong success.

All of the sponsors listed below are vital to ensuring this annual celebration of teachers is both memorable and educational, and I especially want to thank Macy’s for their contributions. In addition to hosting a star-studded gala for the teachers of the year and their loved ones, Macy’s donated $102,000 in cash rewards and gift cards. I am already looking forward to next year’s festivities.

To see a list of the 2016 district teachers of the year and to learn more about the Teacher of the Year Program, visit http://www.fldoe.org/teaching/recognition-recruitment/fl-teacher-of-the-year-program/.

My Tweets
Just for Parents Blog
Create a free website or blog at WordPress.com.